The ElClimA LIFE project contributed to the realization of a special mission to Madagascar, which is the wintering area of  Eleonora’s falcon, aiming -among others- at the recording of the habitats being used by the species and the main threats affecting it. After more than 12 years of action for the protection of the species in the Aegean this is the first time a mission takes place in Madagascar.

The Eleonora’s falcon (Falco eleonorae) is a falcon which breeds in the Mediterranean Sea. The easternmost colonies of the species are in Cyprus and 85% of its world population reproduces in the Aegean islands and islets. By the end of the breeding season in late October the species migrates to Africa, with a final destination the island of Madagascar.

In 2015 Thomas Hadjikyriakou, partner of the environmental consultancy company NCC and PhD candidate at the University of Cyprus, was in Madagascar, where he held monitoring of Eleonora’s falcons in 10 areas. According to data from GPS HD transmitters that were placed in Eleonora’s falcons in Cyprus these areas were estimated being systematically used by them.

The research showed that the species uses open areas, crops, tree plantations or forest areas with openings. A key element, common for all areas, is these areas to have at least some large trees, which are systematically used by the Eleonora’s falcons. It was observed that although the birds when they reach Madagascar use areas with more disturbed ecosystems, such as forest plantations, later they move closer to rainforests, where they seem to feed.

The risks that threaten ecosystems but also Eleonora’s falcon in Madagascar are mainly the land use change by converting natural areas into plantations of alien species or crops and the overall degradation of natural ecosystems. Due to the country political instability earlier attempts to protect natural areas have been degraded so that effective management and protection measures for the Eleonora’s falcon and the habitats that it uses cannot be effectively implemented. However under the ElClimA LIFE project, there will be cooperation with local nature conservation organizations to study the foraging areas in Madagascar during the winter and development of Good Practice Guide which will specify management measures to ensure a favorable conservation status for the species in Madagascar, too.

Through this study, valuable data was collected about the threats the species faces by man, and the impact of both human intervention and climate change was assessed. 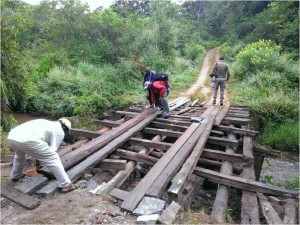 Preparation for passing over ramshackle bridge in Madagascar to access a remote area (© Th. Hadjikyriakou) 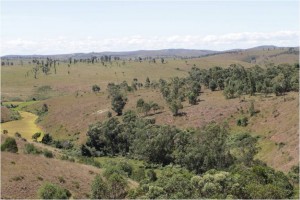 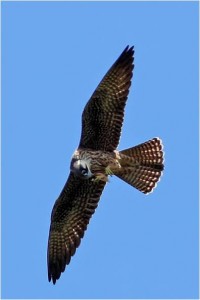 Eleonora’s falcon feeds on insects over a rainforest