Master thesis for the Woodchat Shrike in Antikythera Island

The Woodchat Shrike (Lanius senator) is a migratory passerine and one of the main preys of the Eleonora’s falcon. In spring the Woodchat Shrike is observed in Antikythera Island where it stops to replenish energy reserves during its journey to the breeding areas in Europe. The biologist, Danai Papageorgiou, in the frame of her Master thesis in the Department of Biology (University of Patras) and also in the frame of the ElClimA LIFE project, studied for two months the behaviour of the species in Antikythera Island, last spring. 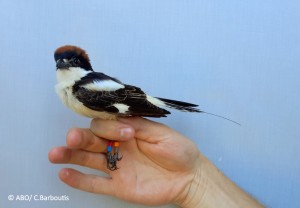 A Woodchat Shrike participating in the study with radio and colored rings for monitoring.

According to the findings of her study, it reveals that the first Woodchat Shrikes arriving on the island are mostly males while later during the migration period more females arrive. A similar trend is observed with respect to the age of individuals, i.e. adult Woodchat Shrikes come first in raltion to the younger. As the migration period goes on, the birds reduce their time spent on the island, as they rush to complete their journey to the North before the beginning of the breeding period. During their stay on the island the Woodchat Shrikes spend time feeding on insects that detect on the ground. They are observed to be sitting mainly in maquis vegatation of at least 1m high, such as olive and almond trees that were traditionally cultivated on the island, flanked by low vegetation. This mosaic vegetation constitutes ideal observatories for the sudden sweeps of the Woodchat Shrikes to the ground, while the dense foliage of the maquis vegetation allows them to hide quickly in case a predator (bird of prey) appears in the area.

The research results of D. Papageorgiou will be used when creating refueling sites for passerines on the island of Antikythera and specifically for the selection of plant species to be planted there under the ElClimA LIFE project. Refueling areas are expected to enhance the ecological value of this important refueling station for birds, since the ongoing climate change, that is expected to intensify in the coming years, will largely affect Mediterranean ecosystems. 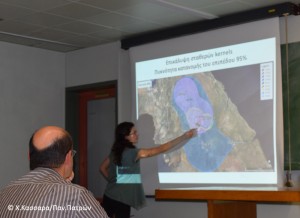