In the frame of the LIFE ElClimA project, GPS/GSM trackers were fitted to three female Eleonora’s Falcons reproducing in colonies in the region of Antikythera Ιsland, in order to record their daily movements both during their stay in Greece and during their migration to and from Madagascar.

The trackers that were fitted to the three falcons are made of light materials and have aerodynamic shape, so as not to impact on the falcons´ behavior. The trackers provide the exact position of the falcon at a given time (usually every two hours), the flying speed, the ambient temperature and the flying altitude. These data reach the computers of researchers through the global mobile network (GSM) or they are received through special portable antenna systems (UHF) when the falcon is within sight; then they are evaluated and processed for further analyses. The conclusions drown about the daily habits of the Eleonora’s Falcons and the locations that they prefer to use for hunting, roosting, nesting, etc., are valuable for the design of protection measures and conservation. Moreover, they enable the general public to discover the unique capabilities of this charismatic species. Everyone can travel mentally with Eleonora’s Falcon over the Aegean Sea and Africa, and learn about its needs, the dangers it faces and how they can contribute to its protection.

The three falcons were named after place names on the island. The names given are Apolytara, Aegilida and Kamarela.

Apolytara: The southern cape of the island where the homonym lighthouse of Apolytara is located. It is a point symbol for the island and for the sailors passing through the Strait of Antikythera Island.

Kamarela: The most beautiful and typical beach of the island. The name comes from the huge rocky arch that the power of the sea has created in the west coast of the island.

Aegilida: The name which, in antiquity, was attributed to the island of Antikythera (Aegila, Aegilia) and it is still preserved in inscriptions found in the excavations of the ancient castle of the island.

In the past, we gathered similar data using satellite tags (Argos PTTs) from two adult female (Voreas, Iris) and two siblings (Zephyr, Notos) originating from a colony in central Aegean. These tags enabled us to monitor their daily movements (http://www.ornithologiki.gr/page_cn.php?tID=2563&aID=1037) and subsequently to explore which ecological factors determined their southbound journey towards Madagascar, their distribution pattern there and their northbound journey towards the Mediterranean Sea.  (Kassara et al. 2012, Journal of Ornithology 153: 839-848; Kassara et al. 2014, Bird Conservation International 24: 100-113).

Aegilida started her long journey in the early hours of October, 27 and after a short stop on Gavdos Island she continued towards the coast of Libya where she arrived in the morning of October, 28. Forty hours of uninterrupted flight was enough to overcome the barrier of the Sahara desert and get to south Sudan, in Sahel. The distance from the Libyan coast to that point was about 2300 km, which means that the falcon flew at an average speed exceeding 50km/h.

Aegilida continued to fly in a south direction over the savannahs of southern Sudan and Uganda, following the waters of the White Nile. The pace of travel becomes more relaxed, as she often stopped to feed or to stay overnight in areas with rocks or tall trees.

On November, 8 Aegilida crossed the equator in the north shore of Lake Victoria, the largest lake in Africa and one of the largest lakes in the world. After crossing the savannahs of Tanzania arrived in the Mozambican coast in the afternoon of November, 15. On November, 16 and after just 11 hours managed to cross the 600 km of the Strait of Mozambique and make a stop at the archipelago of Barren Islands, just 40 km from the coast of Madagascar.

The following morning, Aegilida was on the island of Madagascar for another winter. She will feed on insects, until April, when the primordial instincts will push her on the way back toward the Aegean, to nestle again on the cliffs of Antikythera Island. Aegilida covered about 7500 kilometers in 22 days (~ 340km per day).

Apolytara left Antikythera Island in the midnight of the 25th of October and by noon of the same day she was already over the Ramsar designated wetland of Ain Elshakika, Libya. Within 4 days she crossed the Sahara Desert covering a total length of over 1500km, over the White Desert and the Great Sand Sea of Egypt. On the morning of the 5th day, Apolytara reached the Sahel zone, in the Kordofan area of South Sudan.

From that point, her pace changed. The long crossing of the desert requires replenishment of her forces, so Apolytara stayed more than 10 days in South Sudan, leaked by the White Nile River. On November, 10 Apolytara was on the move again, this time heading southeast, and she reached Ethiopia, which she runs in just over 24 hours. Arriving at Lake Turkana she passed the borders of Kenya and changed her path towards southwest until she reached Lake Victoria. Unlike Aigiliida, she chose to bypass the lake from the east and in a few days she was in the famous Masai Mara National Reserve in Kenya and Tanzania border. On November, 25 and while Aigiilida had reached Madagascar a week earlier, Apolytara after many small stops in vast areas of savannah in Tanzania, turned east. Her target was now to reach the Indian Ocean, and would take only three days to travel the 850 kilometers that separate her from the ocean.

At this point, Apolytara was in Quirimbas archipelago on the Mozambican coast, opposite the Comoros Islands preparing for the second great crossing of a marine area during her autumn migratory route. At this point the distance that separated her from Madagascar was 800 km and the falcon waited for the right weather conditions to overcome this obstacle, too. After three days, in the morning of December, 1 she launched for the crossing and after just 24 hours of continuous flight she landed safely in Madagascar. From now on she will be directed to the interior of the island and feed on insects at the edge of tropical forests until her return journey to Antikythera Island. Her arrival in Madagascar 17 days later than Aigiliida indicates that Eleonora’s Falcon follow an individual strategy regarding their migration route to the wintering areas. Possibly, the pace and the route followed are dictated by factors such as energy reserves and experience.

Kamarela left Antikythera Island the same day as Aegilida, with only one hour difference. Like Aegilida, Kamarela stopped on Gavdos Island and shortly after midnight she started crossing the Mediterranean.  She arrived on the coast of Libya in the morning of October, 28. She was heading southeast, a flying over the Sahara desert, when the bird’s route changed and began to head north after having reached Egypt. Very slowly, she came back to the Mediterranean coast, in the town of Sidi Barrani in Egypt, close to the border with Libya. After two days transmitting from the same point inside the city, the tracker stopped transmitting on 31st of October. The fate of Kamarela remains unknown, although she is more likely to have been killed or trapped by humans. We cannot exclude of course the case of technical failure, but the latest data before the last technical data received from the tracker do not support this.

The coasts of North Africa are recognized as a real death trap for many migratory birds, including birds of prey such as the Eleonora’s Falcon. Illegal trapping of birds takes place with nets on the coast and with traps specifically designed for predators. The traditional falconry is booming in these areas but there are also few poachers who smuggle trapped prey to the markets of major cities of Egypt and the countries of the Arabian Peninsula.

The sad fate of Kamarela in the Mediterranean coast of Egypt is an event that has brought us face to face with the harsh reality of this continuing practice, which is a major threat to migratory birds. It is also a fact that reminds us that for a species with such a great migration route as the Eleonora’s Falcon, the protection actions taking place in the breeding areas do not constitute a guarantee for its conservation; instead, there must be adequate conditions for the development of environmental awareness in all countries along the migration route and mainly in Madagascar where the species overwinters.

The social, political and economic factors that determine the fate and actions of people in African countries are beyond the ornithologists’ and environmentalists’ influence.  Yet, improvement of their life conditions is a factor that necessarily takes priority over, yet ultimately contributes to, any environmental education and awareness for the benefit of wildlife. 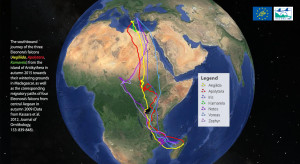